This is a story of one of my “grail games” that, well, most people would scratch their heads at. Sometimes you want a game that nobody else cares about. There are a variety of reasons for this, but what you like is what you like. This is one of my stories.

Just when I thought I had my Raven running beautifully, it just started acting up. I would press the start button and the game would begin to start, but then not kick out a ball, the sound would stop, and none of the coils would fire. It was very odd. I knew from experience that Gottlieb games can get a bit wonky with irregular power or switch inputs, so here’s a short, 2-part video series of the “rabbit hole” I went down trying to figure out what was wrong? (As always, Ockham’s Razor tends to prevail)

Along the way, we learn a few things about the switch matrix on these System 80 games and how they differ from other manufacturers like Bally/Williams when it comes to trying to trace switch matrix issues. Here’s part one:

And here is part two, where we figure things out…

During the mid to late eighties, Gottlieb was under the control of Premiere, and much to the confusion of those in the pinball community, they decided to create a string of popular theme knock-offs, from “Hollywood Heat” copying “Miami Vice” to “Raven” copying “Rambo.” To make matters worse, they used photo-realistic backglasses, which was quite a diversion from the hand drawn artwork people were used to seeing. The games ended up not being very well-received

As such, there’s not many of these games left. But I got my hands on the first game in this series, “Raven” – the first pinball machine to use a photo-realistic backglass. While there are many reasons to not like this game, there are also some reasons why it’s way underrated. It’s a very FUN game to play!

Gottlieb System 80 games do not have a setting for “free play”, so there are some hacks you can do to turn your game into play for free. I outline how to do this in this video: 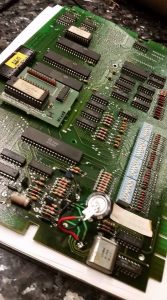 One of the first things you have to do when you get an original Gottlieb System 80 game is deal with their on-board NiCad battery pack, if it has not already been addressed. Gottlieb installed these batteries on the actual MPU board itself and like on other games, it’s a common cause of serious problems with the game. The batteries begin to leak after awhile, releasing electrolytes that corrode the MPU board and the components on it. This can happen even if you don’t see any obvious leaks. The batteries need to be replaced. There are a few options you have to do this: a remote battery pack (3 AA batteries along with a blocking diode to keep them from being charged if they’re not rechargeable batteries), a 2032 lithium coin cell, or my favorite, a 5.5v 1.5F memory capacitor. The memory cap will last the longest and will not destroy any components on the board. It will keep a charge for at least a month or more without power. Here’s a video of me adding this fix to a Gottlieb System 80B MPU