Another thing I do in addition to operating and repairing pinball machines is run a special, unique space in the New Orleans area called the “PinChurch” – it’s a long story about how this came to be that you can find out more here if you want. But in short, it’s a unique space that is supported by a small but tight knit community of enthusiasts and creative people.

We do all kinds of things in the club, including occasional outreach projects to help those in the local community. We’ve turned our arcade into a high quality recording and broadcast studio and during the Covid-19 pandemic, as well as during the phase outs, we’ve been hosting local artists who need to make a living because the places they normally play at are closed. We live stream the events and help people discover new music and help support local artists.

I made a short video of what that’s like, so share with you all. To find out more, visit www.PinChurch.com – you also can help support our efforts if you like!

Just back from the 2019 Texas pinball festival. Found some time to walk through early Friday evening to give you all a quick glimpse of the show. Pardon the crappy camera work but I wanted to post something quickly and as usual, no editing, but it should give you a nice feeling of what it was like to be there and the large selection of games and booths. Very big turn out. Over 400 games with a lot of new ones. I share some of my hilights after the video here.

This is a quick walk-thru of the 2018 Houston Arcade Expo (HAAG) before the show opens. To give you an idea of how much work is involved in getting everything set up. I apologize for the shaky camera. And it looks like YouTube has disabled their video stabilization ability (boo!) so I can’t stabilize it online. Anyway, I hope you enjoy this short video! 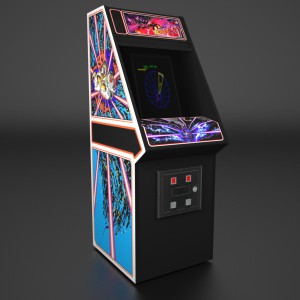 I take a bit of a break from working on pinball machines in this video and do some work on a Tempest video game I pieced together from various parts. The monitor started smoking and fizzing on me and then went completely out — which signaled a good time to completely rebuild it.

For additional information on working on these monitors, here is a good resource:

I get my parts from http://www.therealbobroberts.net/

I just got back from the Houston Arcade Expo and have posted a video-walk-thru of the event. It’s always a fun time and this year was no exception. Although I actually did not pick up a game this year… I’m determined to finish my existing projects before adding any more. Any way, check it out:

I’m just getting to the point where I can take some time to write up a description of my trip to Houston for, (I think what is it, the 11-th annual) Houston Arcade Expo.

This was my third year attending the event and as usual, it was a blast.

The array of video games and pinball machines was impressive. The event is seeded by a few world-class collectors in the Texas area who bring both popular as well as extremely rare games. The show features a large array of vendors, IFPA pinball tournaments, classic arcade and console tournaments, seminars, and a crazy music and light show as well as the occasional Darth Vader impersonator. It’s held at the Crowne Plaza in North Houston who does a great job of hosting and providing accommodations for those traveling from outside the area.

Here’s a short video walk-thru of the event:

The swap meet was Saturday morning. Actually, it began with me on Friday as my friend came across a game in a guy’s trailer that was going to be at the swap meet that he sold to me the day before. This was another one of those “no brainer deals” – an almost complete pinball machine for $100. The perfect kind of project we like. A Gottlieb System 80 called “Super Orbit”. This is the forth Sys80 game I’ve picked up and I’m looking forward to doing some specific videos on repairs and restorations on that platform in the near future. I also had good luck last year picking up a swap meet game real cheap that turned out to be really fun to play (Stern “Memory Lane”).

It’s hard to tell if the swap meet was bigger this year than last. It definitely went on longer though and there was a little bit of everything. HAAG seems to have a lot more vintage console gamers coming out and trading this year.

All in all, a great event put on by great people. If you’re in the area, make a point of checking it out.

Here’s a look at playing the vintage 1976 Williams EM pinball game, “Space Odyssey”.  This is a classic Williams electro-mechanical game that featured a sweeping stationary target across the middle, and ball kickers on each side of the flipper.  It’s especially exciting when you can get the timing just right so the kicker fires the ball into the moving target.  This is the 2-player version of the same game, “Space Mission”.  There were 4,300 of these produced.

And as a bonus here’s a quick look at a vintage 1975 Gottlieb “Fast Draw”, the 2-player version of “Quick Draw” – another classic EM: